Voice Over for Documentary Narration

The highest quality voice over. Go from text to speech using our AI voice over studio. Better than Google, Amazon or IBM.

TRY FOR FREE
CONTACT SALES
DID YOU HEAR THIS? PLAY SAMPLES 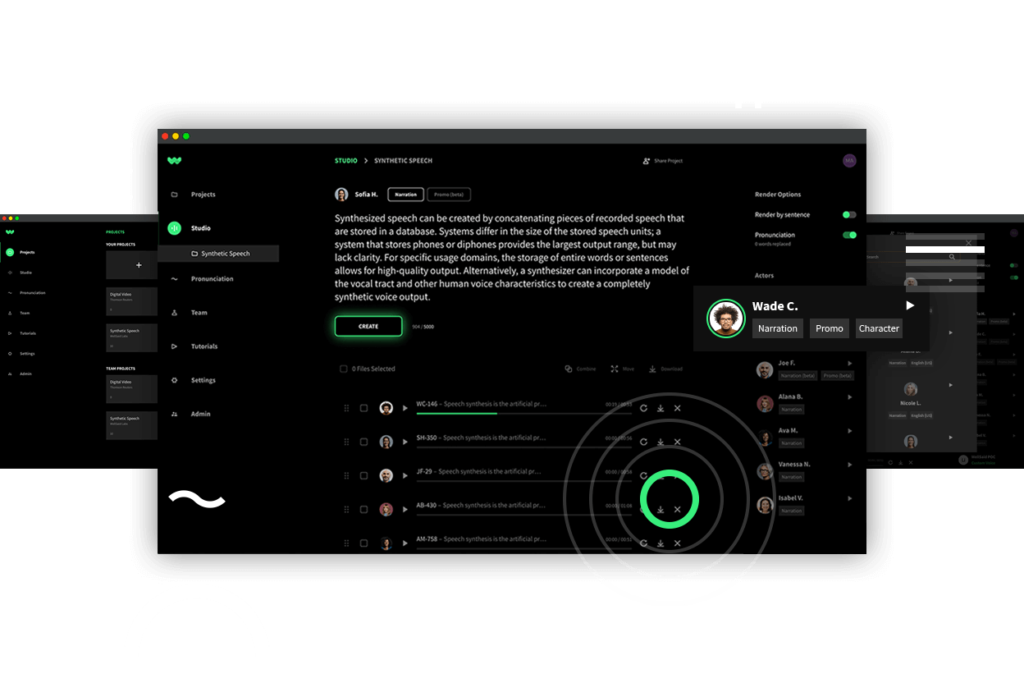 Choose a Voice Over Narrator

“Helping a client through their accident claim can be a difficult...”

“Are you ready to get revved up? Ford of Seattle has all the hottest SUVs...”

“When you first open a Client Interaction, you will be on the...”

“Welcome to New Patient Protocols for the ICU. This course...”

“Welcome home! From a breezy open entry to high ceilings...”

“The human voice is generated when the lungs, the vocal folds...”

How we create our voices

Take a behind the scenes look at how WellSaid Labs creates an AI voice.

From L.A. DJ to an AI generated voice over. How this DJ cloned his voice.

Elevate Your Documentary with the Right Voice

Capture the magic of voice over with the AI-powered documentary narrator that never stops working.

Documentaries offer insights into the most interesting and profound aspects of the world. Make your documentary more impactful with an engaging voice that immerses listeners from start to finish.

Tell your story with a documentary voice over narrator that delivers a tangible, measurable rate of return on your investment.

Capture your audience and speak for your brand with WellSaid Labs for free today.

Creating voice over for documentary films has never been easier. Follow our three-step process to get the best voice that matches the mood, subject matter, and message you want to convey.

Take the hassle out of managing traditional voice actors without compromising the quality of your production.

Here’s how to integrate an epic voice over in your documentary with ease.

Step One – Write Your Script

Decide what you want your documentary narrator to say. Read through your final script and match it up with what’s being displayed on-screen.

Tweak the tone, intonation, and diction, and your narrator with AI will respond. Our text-to-voice platform allows you to create an entire voiceover in minutes with nothing more than your script.

Our documentary narration is rooted in our vast suite of AI-powered avatars. Choose from our default personalities to read the news, provide exciting insights into little-known subjects, or recount history.

WellSaid Labs also supports building custom voices from the recordings of real people. All you need is their permission and their voice recordings to take advantage of cutting-edge deep learning technology.

Make last-minute edits, match your narrator with music, and tweak for TV. Once all the changes you want are made, WellSaid Labs will take care of the rest.

It only takes minutes to turn silent documentaries into engaging productions for any medium.

WellSaid Labs brings together the qualities of traditional voiceover artistry with the power of deep learning technologies and AI. Our enterprise solutions enable you to create your natural-sounding documentary narrator at a fraction of the time and cost.

Sign up for an account to make your next documentary the one that gets people talking and makes the most significant impact possible.

To discover the power of the documentary narrator that matches your message, try WellSaid Labs for free now.

Your choice of documentary narrator can make or break your next project. A great narrator will capture the imagination of their listeners and bring your documentary to life. Poor narration will shift the audience away from the documentary’s visuals and messages, causing viewers to miss the entire story.

To understand the qualities of a narrator and how to take full advantage of AI-powered voices with WellSaid Labs, here are the answers to the most common questions you might have.

What is a narrator in a documentary?

The narrator is the voice that guides you through a documentary. They give meaning to the things seen on screen, regardless of the subject. Images, videos, diagrams, and more require explanation, and the narrator is responsible for that.

It doesn't matter what kind of documentary is being made. A great documentary needs to be narrated in a way that attracts the audience. An appealing voice must be used to capture the audience's attention while also keeping the viewer focused on the documentary's content.

Narrators set the tone of the documentary the second it begins. They control the narrative, meaning they can add emotional weight to any scene. Without the narrator, documentaries lose much of their impact.

How much does a voice over for a documentary cost?

Documentaries can be as short as a few minutes or as long as a feature-length movie. Professional narrators can charge thousands of dollars for their voices over time. The top narrators can easily command six-figure sums every year for their work.

Documentaries vary in narration length. The cost largely depends on the experience of the narrator, their schedule, and how much they will speak.

At WellSaid Labs, you can enjoy the same standard as a professional narrator with the power of AI. You will only pay a small portion of how much it would cost to screen, interview, and hire a human narrator to perform the same role in your film.

We also offer a free trial designed to help you better understand how our AI technology works. During your trial period, you will have the ability to create a project with up to 50 audio clips and access to all the voice avatars we offer. From there, you can evaluate what plan and price work best for you.

Reduce your costs and streamline the voice production process now.

What is the turnaround time for documentary narration?

A documentary narrator can spend hours perfecting the voice and tone of the project they are working on. A project's complete turnaround time can take weeks to months, depending on the narrator’s schedule and how intensive the project is.

Text-to-voice technology from WellSaid Labs can give you a full narration track for your documentary in a matter of minutes. All you need is your script. WellSaid will take it from there.

Can you get documentary narrators in different languages?

You can. Increasing your reach means hitting your target audience in their most comfortable language. Relying on English reduces your reach because non-speakers may need to rely on closed captioning to understand your production.

WellSaid Labs is constantly expanding its range of languages. Today, every major world language is available on the platform. You can easily translate your documentary into French, Spanish, German, Italian, Russian, Swedish, and even Japanese at the click of a button.

As technology advances, our range of languages expands, providing you with a larger target audience than ever.

What makes an effective documentary narrator?

The narrator of your documentary is the guide that takes your viewers on a journey. They bring clarity to what people see in front of them. Narrators can add meaning, context, and so much more. In many respects, the visual content is secondary to the narrator’s contributions to the documentary. Nailing your narration means accurately capturing the mood of everything that is going on within the documentary.

You can search the internet and find documentaries on every subject under the sun, from pollution and environmental changes to the evolution of popular music and our changing political landscape. Matching the tone to the messaging and the voice to the context is pivotal to creating an impactful documentary that calls the viewer to reflect and take action.

Why use an AI Voices as a Narrator?

Most documentary filmmakers want a narration that aligns with the content and tone of the documentary. WellSaid Labs does this using the power of AI while still making the documentary feel human. You never have to worry about the voice matching what is being portrayed on the screen.

AI-generated voices were once considered an ill-suited replacement for professional voice actors. In the past, they could not understand the subtleties that made up professional voicework. Moreover, the results often sounded robotic and unnatural, which documentary makers wanted to avoid.

Advancements in the field mean that listeners can’t tell the difference between an AI-generated voice and a human reading the words from a script. You don’t have to worry about listening to robotic recordings with AI speech technology. AI voices sound more human than ever.

AI voices are also being used by more people in the entertainment, tech, profit, and non-profit space to elevate their brands with a voice that is consistent and compelling.

WellSaid Labs enables you to build and customize your voices from scratch. Millions of voice combinations are available, allowing you to create a collection of voices for different projects.

What else can WellSaid Labs be used for?

More people are hearing AI voices whether they know it or not because text to speech is now so realistic. Text to voice software has rapidly improved in quality due to advances in Machine Learning.

Small businesses are using AI voice over generators to create an affordable voiceover from social media, podcast and radio commercials. Corporate training trainers are using it for eLearning voice overs.

There are over 50 voice actors in our library including both male and female AI voices that can be delivered in a conversational, promotional and narration tone. One of the best things about text to speech is that you can download multiple voiceovers to an MP3 and compare how they fit into your video project.

Brands that need a robust voice infrastructure can take advantage of WellSaid Labs text to speech API, and voice maker studio for teams that are collaborating on video projects. Brands that want a consistent voice can have WellSaid Labs clone a voice from a voice actor so that their brand communication is consistent.